The Dania Beach CRA is excited to announce that our highly successful, award-winning, Arts and Seafood Celebration is BACK May 19 - 20, 2018! Mark your calendars now and please stay tuned for more details!

Jean Denis Louis is a professional artist born in Miami, Florida 1989. Raised in Ft Lauderdale surrounded in art. The Haitian artist specializing in a wide variety of different mediums, not only Airbrushing, Acrylic and Oil paints, but he also found a love for Tattooing and Photography. Jean started drawing at the age of six years old and knew he wanted to become an artist by the age of 9 years old when he began selling drawings of kid television shows at school. As Jean Denis entered his teenage years at Dillard High School of Performing Arts, he learned about crafting his artistic skills, winning many art contests along with scholarships and learning how to present his work in local in a professional manner in art galleries.

Shortly after graduating high school with high score in his AP classes, he went on to work with Jean-Claude De L’Herbe, where he learned to airbrush motorcycles, cars, and statues. While still perfecting his drawing and painting abilities, he worked on opening his mind to other types of art. A few years later Jean Denis decided to become a tattoo artist after doing an apprenticeship in Ft. Lauderdale, where his permanent works of art travels all over the world. He has turned it into a career and has been tattooing for the past 9 years and shop CO-Owner for the past 3 years and counting. During his time tattooing Jean continued to work on his paintings and drawings big and small. Most recently entering into “Art Warz” painting contest and taking the number one spot! Jean Denis is well known in his community and social media based for his details in his work and ability to create on the fly.

There isn’t an art medium Jean Denis prefers over another, he enjoys the different experiences he has with each mediums. He continues to grow and work on his art career as a wide range artist. 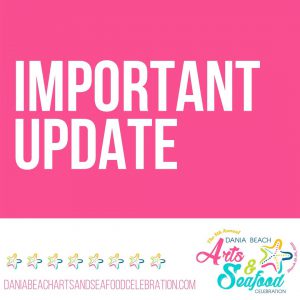 We regret to advise that due to concerns about novel coronavirus, or COVID-19, the Dania Beach CRA Board has decided to halt all plans for the 2020 Arts and Seafood Celebration. The event will not be held as planned on March 28th and 29th. We will continue to monitor this national health situation and advise on the possibility of a future date for the event in 2020. This decision was made with your health and safety in mind after conversations with Dania Beach city officials and recent announcements from the Florida Department of Health regarding preventative measures to help prevent the spread of coronavirus.
The Dania Beach Community Redevelopment Agency remains committed to marketing Dania Beach and ensuring a wonderful experience for residents and visitors! However, we value the wellbeing and safety of our community above all else.

We promise to communicate with you as soon as we know more. We look forward to eating, drinking, and celebrating with you soon!